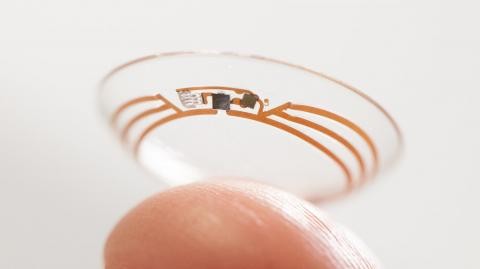 If you’ve ever watched a spy movie and dreamed to donning your own pair of smart glasses, that future may be nearer and more covert than ever before. This month Samsung has been approved for a South Korean patent(link is external) that takes smart glasses to a new level, shrinking the technology onto a contact lens.

The lenses equipped with cameras and sensors can be controlled with the blink of an eye. Promising to be less clunky and disruptive than the failed Google glass, these lenses could make the experience of augmented reality content more discreet.

Google glass, released in 2013, was one of the first augmented reality eyewear options made available to the general population. While it created a huge buzz among early adopters, it was widely criticized for its bulky obtrusive frame. It also caused privacy concerns for many and was subsequently banned from many movie theatres and casinos. Ultimately Google Glass was pulled from the market, and is being re-envisioned by Google(link is external).

Samsung’s contact lenses seem to solve many of the problems encountered by Google glass. The contact lens would not only reduce bulk and integrate more seamlessly with the needs of the viewer; it would also take higher quality images. The patent hints that sensors on the lens would be able to detect the direction that the wearer is looking, and provide related overlay. All the data would then be sent to the user’s smartphone via the small antennas on the lens.

The one problem found with Google glass that the Samsung lens is sure to exacerbate is that of privacy(link is external). The discreet nature of the contact, as well as the ability to take high quality photos and videos without detection is sure to get the attention of privacy experts.

If this all sounds a bit more like James Bond than real life, know that Google(link is external) already has a similar product in the works. Patented in 2014, their contact lens is aimed at monitoring the blood glucose levels of diabetics. They embedded tiny glucose sensors and antennas to connect with the users smartphone. These contacts aim to provide second by second glucose readings by using tears instead of the traditional blood extraction and finger pricking. It is currently making its ways through clinical trials, and could provide a better quality of life for diabetics.

While both of these options may not have you abandoning your current contact lenses anytime soon, they are an interesting look into the possible applications of augmented reality.