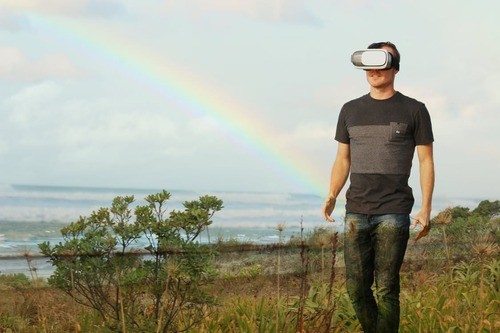 Have you ever wanted to develop an app, but lacked the hardware to do so? Here at Tech Hub we work to make sure students can access resources they need and break down the financial barriers to technological innovation. Our Student Developer Kit (SDK) is one program aimed at increasing technology access across The Ohio State University.

The SDK includes a selection of cutting edge hardware devices that are loaned out at no cost to student developers. These items can be used to develop apps, hardware or other projects. Loans last up to seven days, and are renewable based on demand.  You can check out Kinect, Oculus Rift, Structure Sensor, Google Glass, Leap Motion and Myo Armband.

Looking for some inspiration? We had a chance to speak with two students who shared more about the projects they created with the kit:

James MacDonald, a graduate student in the School of Music, used the SDK to test alternate ways of controlling music on computers.

“The first thing I checked out was the MYO armband back in the fall. My advisor heard about these and was curious if they could be used as a controller for computer music. I checked one out for a week-long period to see what sort of data could be gathered from it and how to map it to various musical parameters.

The second thing I checked out was the leap motion controller. I had seen several other people use the leap motion in various art and music projects and my advisor suggested I look into it. I checked out the SDK and again began working on using it to control computer music parameters. I was able to start mapping it virtual instruments and audio effects very quickly, as there were already a lot of different tools available to gather the data from the controller and send it via Open Sound Control (OSC) messages.

Near the end of January, I checked out the leap motion controller again as I had been asked to try to create a virtual Theremin, one of the first electronic instruments, controlled without physically touching the instrument, for a performance. I found a few open-source pieces of software that used the leap motion to emulate a Theremin. In the end, however, they decided to use another instrument to emulate the Theremin in place of the leap motion.”

Joshua Johnson, a graduate student studying biophysics, tested out virtual reality concepts on the Oculus Rift as they relate to his studies.

“The item I used was the Oculus VR headset which I checked out in early December and then again in early January. I used the SDK to try many of the virtual reality demonstrations that were to free to download. The kit was a valuable resource for helping me experience the virtual reality technology first hand which is really required to fully understand it's potential. It enabled me to better understand how immersive environments can be used to communicate scientific information such as protein structures. I definitely think other students should know about the SDK to help them try out new technologies as trials before investing the time and money themselves.”

Are you interested in using the Student Developer Kit for your project? Start the process by filling out our developer request form. Once you fill out the form we will respond back by the next business day to let you know our availability. We will set a date for your loan to start so you can come pick up your item and begin work.

Is there an item you would like to see on the SDK that we don’t already offer? Email Tech Hub with suggestions, we would love your input.