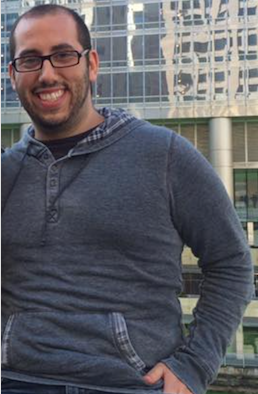 28 hours of four square? Not only is that a world record, but its one held by our TechHUB staff member Zach Weisberg. We’re continuing our series of interviews with TechHUB and Zach has a whole lot more than just four square to share.

This week we got the chance to talk to him about the future of Coin Card, his favorite thing about TechHUB, and the secret of finding a good study spot on campus.

What did you major in?

I just graduated with a Bachelor of Science degree in Zoology. I work at the zoo and I’m trying to go down that path, but you have to work your way up, so it’s really nice working at TechHUB. I came here freshman year when it was still Wired Out and I thought it was really cool. When they had a job opening I went for it.

What’s your favorite thing about TechHUB?

I love the staff that we have. Another cool resource at TechHUB is the BuckeyeBar, which allow students to get help in fixing software issues with their laptops. That’s not uniquely a TechHUB thing, but the fact that we can help with consultations and allow staff to act as a liaison for BuckeyeBar is a really nice perk. Often our BuckeyeBar is a lot less busy than the one in Thompson library because people don’t really know about it.

What new technology are you most excited about?

If you could only use one piece of technology, what would it be?

If I could only have one piece of technology, it would be my MacBook Pro. I literally can’t do anything without it.

What OSU resource do you wish you would’ve known about when you were a freshman?

Find a good place to study. For me, it was always a struggle to find a reliable study spot because a lot of times I didn’t really want to go to Thompson and go up every floor to search for that one nook. I would say study at home, but no one really ever studies at home that much. My personal hidden study spot was Orton Hall in the building’s basement. There are a couple of classrooms down there but they’re not being used at all, so they are nice open classrooms that are quiet with lots of outlets.

I really liked the campus. Anytime you’re having an off day and just walk around campus, it really helps clear your mind. There’s always just a general positive attitude that surrounds campus.

My fun fact is that I’ve broken a world record. I broke the longest game of four square world record with my brother and some friends when I was in high school. We played for 28 hours straight!

Come on over to TechHUB and say hello to Zach. If you’re having issues with your computer, stop by the BuckeyeBar in TechHUB and let our TechHUB staff help you. Who knows, you might even have time to challenge Zach in a game of four square.